I’ve been thinking about kavanah (כונה) recently. It’s probably not an odd word to mull over, given we’ve just celebrated Rosh Hashanah, observed Yom Kippur and have just received the Torah for 5773 CE.

Still, I am struck by how many different ways that people seek, define and establish kavanah – that elusive, ever-Jewish state of mind and heart that allows us to pray. Often summarily explained in English as the intent or “direction of the heart” it has an equally varied association with the Hebrew language.

According to the Ben-Yehuda Hebrew/English dictionary, kavanah translates as intent, purpose, devotion or meaning. It hales from the same Hebrew root as kohnen (כּוֹנֵן), which means to build or to establish; nachonut (נְכוֹנוּת) , preparedness or readiness; and al nachon (אל נָכוֹן) , to the right. Anyone who has lived in Israel knows the expression, Nachon? (נָכוֹן) True?!

The concept of kavanah has been explored by talmudists and kabbalists for centuries. The 12th century scholar Maimonides considered it one of five essential aspects of prayer. It’s as elemental to our spiritual connection as Jews as it is to our cultural definition. A cantor can sing with kavanah, just as one can pray with kavanah. Its lexicon is evidence that spirituality is still at the root of Jewish culture and identity.


Yet the path to connecting with our spirituality as Jews is anything but direct or singular – especially these days. As 21st century Jews, we have the liberty to choose how we best relate to Judaism. Women can, and do attend Shabbat services much more frequently and openly than they did 200 years ago and depending upon the synagogue they decide to attend, they can wear a tallits or tefillin. Men can choose not to attend synagogue, or pick a different shul that is more in keeping with their spiritual views. Our understanding of kavanah may still be guided by ancient rabbinical teachings, but we are much more at liberty to interpret their application.


A friend once told me that he felt closest to God high on the pristine, mountainous trails of North America that were far from the infrastructure, people and shuls of modern city life. There he felt free to concentrate, to pray with intention. There have been others that have espoused this preference, as antithetical as it may seem to the precepts of traditional Judaism.


And yet there are others who are inspired by the closeness of synagogue life. 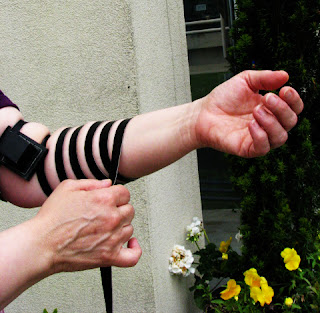 As I watched a friend lay tefillin just before Shacharit (morning) minyan one day, I was struck with the intricacy and beauty of the ritual.  There was something meditative in the steps that she followed as she circled her left arm seven times with the resuot (straps), moving fluidly down across her hand to form the shin and dalet. As one who has never worn tefillin, it seemed to me that kavanah should be easier to attain with such a contemplative and personal custom. How simplified the inexperienced view!

Later as we spoke, however, I realized that while there was nothing easy about choosing to wear tefillin, my observation wasn’t entirely wrong.

“I feel that they are kind of a physical symbol of being tied to God,” explained Debby Fenson, who serves as the ba’alat tefillah for Congregation Beth Israel in Vancouver, BC Canada and regularly teaches young bar- and bat-mitzvah how to pray with tefillin.  “You can’t really connect yourself to God in a physical way, but they are symbolically connecting us to God.”

She admitted donning tefillin was not an easy choice, particularly for a woman who had few female role models to follow. 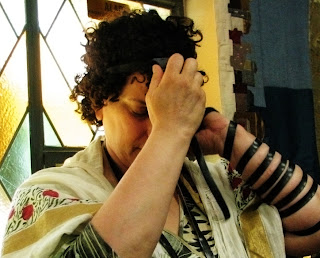 I later came across a blog that expanded on Debby’s comments, but with a different tack:

The blogger on Barefoot Jewess notes that for her, “Tefillin are a spiritual transformer … They help one directly and intensely connect with G-d; they magnify and sanctify prayer and connection. At the very least, they can provide focus; that is their service.”

And having that symbolic physical connection, says Debby, is hard to do without once you’ve worn tefillin. 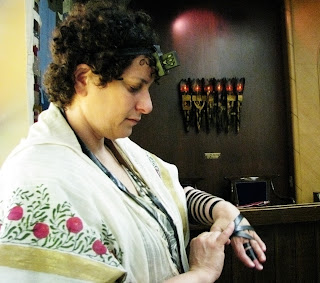 “You get used to it. It feels like it is part of your prayer, and then without it you feel like (you are) missing it, or you feel bereft of it, or something doesn’t feel quite right,” Debby said.

“I can’t imagine my life without them,” Barefoot Jewess admitted. “I can still connect with something greater than myself.”

Stories abound of women throughout history who have donned tefillin during prayer. Most of the examples, such as the daughters of Rashi and of King Saul are quickly discounted by critics for lack of historical proof. Yet the fact that a woman’s right to pray with phylacteries has been a subject of vigorous Talmudic debate since at least the 16th century suggests that women throughout history may have taken steps to assume this mitzvah.

And recent discussions like those above suggest that tefillin is playing more of a role, not less, in women’s prayer today. Further, that women seek to fulfill that experience that the Rambam describes as kavanah: the ability to “remove all distracting thoughts and consider that (she) stands in front of the Shechinah.”

Events like the Tefillin Barbie classes and the World Wrap have helped to dispel stigmas about women wearing phylacteries. But so have those individuals who have courageously stepped forward to talk about the real topic: what it meant to them; how it transformed their lives and their sense of “intentional prayer.”

By talking about the experience and relating it to their own spiritual growth, they help demonstrate that the spiritual practice of prayer is personally fulfilling – as well as an ancient Jewish custom. As we have already seen with the use of tallits by women in some Modern Orthodox congregations, open discussions like this have the potential not only to change minds, hearts and opinions, but to bridge ideologies, a concept of peace that lies at the heart of kavanah. 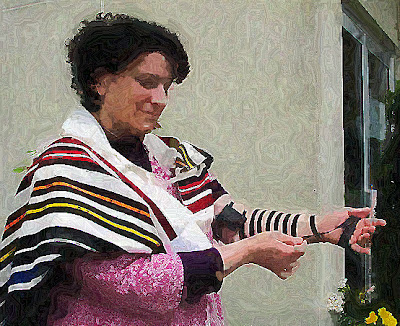 © Photos and text by Jan Lee unless otherwise noted.
Posted by Jan Lee at 15:29