For many of us who were kids at the time of the Munich Massacre, the slaughter of the 1972 Israeli Olympic contenders by terrorists was an incomprehensible act. The events, which unfolded in painfully slow detail over several days represented a turning point in our lives. For me, it signaled the unexpected birth of my Jewish identity.

No doubt for many young Jews who dreamed of competing at the Olympics one day, the murders provided a dash of cold reality on their futures, a wake up call to the risks that they might be taking by competing in an international competition like the Olympics. In truth, they symbolized risks that to some visceral level, every Jewish competitor recognizes when he or she steps out into the limelight. The Munich terrorist attack however crystallized those fears into reality.

I on the other hand, had never dreamed of Olympic stardom much less an athletics career. Nevertheless, with Munich something changed in me. In my family, events like these were not discussed. They were internalized with an edgy discomfort that made discussions of the most profound tragedies impossible. As I watched the anger on my father’s face and listened to my mother’s frenetic, almost anxious silence during radio reports, I realized a turning point had arrived. Although I could not tell at the time how profoundly it would affect my family, I knew that something in me was changing.

That awareness revisited me the following year with the outbreak of the Yom Kippur War. As I sat next to my father in the TV room watching the news reports, he said the words that would herald the beginning of a transformation.

“I have half a mind to go to Israel and volunteer."

Looking back, I realize that it was my naivety that both allowed me to appreciate those words as truth, and run with them. My father, a devoutly secular Jew who had devoted his life to clinical research, was a diabetic, almost 50 and in no position to head off to Israel to volunteer during a war.

Still, I memorized that statement with uncanny precision for when I would one day return them to him as my justification for enrolling in an ulpan during the 1974 PLO terrorist attacks in northern Israel.

It is interesting that it is others’ shortcomings that often inspire our own spiritual journeys. The inhumanity and cruelty of the terrorists' actions that day in September awakened an awareness in me that would eventually, through many turns, stops and starts, set me on the path to becoming a religious Jew.

I imagine that there are others who remember the Munich events and were touched by them, or who had pivotal events in their lives that helped them realize their identity as Jews.

Did you experience an event that shaped who you are today? Please share your memories and comments below. 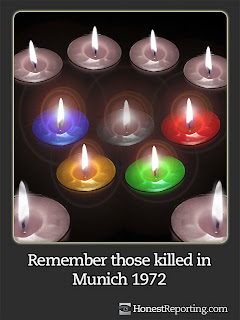