Women of the Wall: Latest Developments

Please be sure to read the latest update that came out just after this posting. 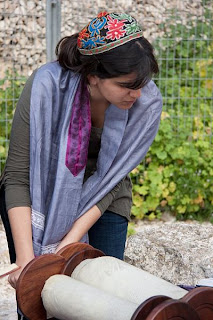 The air has been a bit lighter for supporters of the Jerusalem-based  Women of the Wall. Last month Israeli courts ruled that women who attend services at the women’s section of the Kotel are not breaking the law, and that those who were arrested by Jerusalem police on April 11 for wearing tallisim should never have been detained.


One couldn’t help pick up the sense of optimism and excitement in the organization’s this last Sunday's press release, either, noting that support is gathering for a women's Rosh Chodesh service, May 10, with transportation plans for attendees already in the works.

It will be interesting to see how many turn out and what kind of reception the group receives at the wall now that they are permitted to wear their tallisim.

In an interview earlier this month, board member Cheryl Birkner Mack noted that complaints and interruptions of Women of the Wall services only seem to occur when their attendance has been previously announced. She said that when the women’s group has turned up without announcing it on their website or in a press release they have been able to pray together without police or bystander interference.

"The real proof I have … is that we have on occasion, including about three months ago, gone unannounced (to pray at the Kotel) on a day that was not Rosh Chodesh and encountered no opposition, no problem, no police, no security, nobody at all coming over and saying what you’re doing is forbidden," said Birkner Mack, who suggested that those who seemed bothered by the service know that they could easily adjust their arrival time to miss the hour or hour-and-a-half prayer services.

But now that the group has the law on their side so to speak, have things changed?

Well, maybe. Even though the attorney general announced Monday that he would not appeal the court's decision, there may still be efforts by members of the government to limit women's ability to pray at the Kotel with Torah and tallisim. Today (May 6) Israel's Minister of Religious Affairs, Naftali Bennet said that he plans to propose new regulations that would restrict etiquette at the Kotel.*

A new women’s organization has also stepped up to the plate to announce its objection to the 25-year-old organization’s presence at the Wall. Women FOR the Wall (better known as W4W), says it wants to ensure that “the experience (of praying at the Wall remains) profoundly meaningful” for all women. It’s unclear whether this means that women who wish to hold an integral service of their own and don tallisim are not welcome in the women’s section.

Multicultural Jew will be following these developments this week, and will follow up with our new interview with WOW on Sunday May 13 Pacific Time.

Please share your own thoughts on this matter. Is Women of the Wall speaking for you? Are they speaking against what you believe?


* Shortly after posting, Women of the Wall released a statement on its FaceBook page concerning earlier announcements by the attorney general and minster of religious affairs. It would seem that WOW's confidence that its major battles were over was premature.

It is indeed a troubling time in the Jewish homeland.

Share your thoughts; Israel's unity thrives through dialogue. What do you think will inspire consensus?
Posted by Jan Lee at 14:52